We are ready to unveil results of contests by InstaForex!
2020-06-05 11:40:00
Nowosci Spolki
​HKm Zvolen and InstaForex sum up successful season

InstaForex and HKm Zvolen from Slovakia summed up the 2018-2019 season.

InstaForex closely followed the developments in the Slovak Ice Hockey Championship throughout the 2018-2019 season as the Zvolen team sponsored by InstaForex for many years took part in this rivalry, one of the most prestigious European hockey tournaments.

Looking back, HKm Zvolen was only one step away from the leadership in the regular championship and took second place. Notably, Zvolen showed the best game in defense, missing the least of goals (128).

However, the main part of the Slovak Championship was just about to begin as after the regular championship, there was time for playoffs.

In the intense clash, only one step separated Zvolen from the final again when the Nitra team showed better results in the semifinal. Nevertheless, Zvolen managed to finish the season in the winners' zone and got the bronze medals of the Slovak Championship. No doubts, fans of the hockey club appreciated it a lot.

Thus, this year, HKm Zvolen laid the foundation for future big victories. Perhaps, we will witness them in the next 2019-2020 season already.

Besides, HKm Zvolen is raising a galaxy of talented hockey players who may become sports stars at the international level. Interestingly, three of Zvolen's players were invited by the Slovak Ice Hockey Federation to defend the honor of the country in the 2019 IIHF Ice Hockey World Championship scheduled for May in Bratislava.

We wish good luck to the Zvolen hockey team and all InstaForex traders whose aims have so much in common. 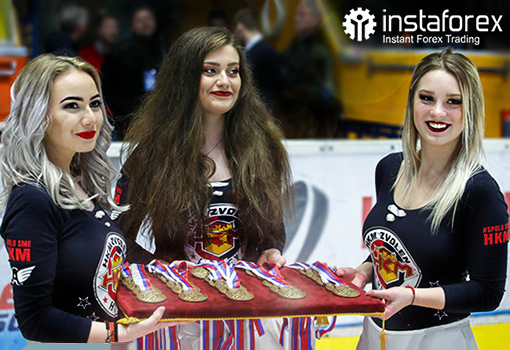